The fourth Israeli Origami Convention ended a couple of days ago. Since the guest of honor was Eric Joisel, I though it was time to write down something I’ve been thinking for a while. 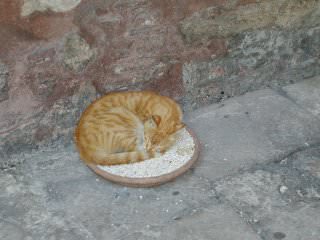 Eric is famous for saying “If anyone can do it, it ain’t art”. This is very distinctive in his later works. As he told us during the convention, he spent nearly 35 years perfecting his art to reach his goal of folding human figures. It began, as he said, from folding traditional style - clear crease patterns and technical folding. From there, he explored the 3D folds, for which his masks are most famous. Only recently was he able to combine the two to reach his current masterpieces.

And that’s where the importance of rats comes in. No, not this kind, and not even this. I’m talking about RAT folds. A RAT fold is a fold whose diagram has text below it saying: “Fold right about there”. For many years I held rat folds in the greatest contempt. But as I age, I have come to appreciate their importance. If anyone can do a fold, it ain’t art. And some rat folds only work out in the hands of a master.

A sidestep. Two prominent Japanese folders - Satoshi Kamiya and Hojyo Takashi. I’ve folded models from both authors, including from crease-patterns. The differences are amazing. When collapsing a model by Satoshi, we have a nearly complete piece of art. All the finishing touches are built into the crease pattern (see his unicorn, for example). With Takashi, it is quite a different matter. Folding the crease pattern is the easy part (which doesn’t imply its easy). It is only half the work. This is were Takashi is a true artist - going from a base to an amazing model is not something everyone can replicate. Few people can do it well. It’s art.

Now, I think Satoshi is an artist as well. There’s been a recent surge of new designers over the past couple of years, and they have only shown that Satoshi’s art is in the design itself, not just his incredible folding skills. His crease patterns are elegant, whereas nearly all of those created by the new stars are cumbersome. No one can design crease patterns like Satoshi.

And that’s art, just of a different kind.

Folding the Peacock from CP

In this article I will show how to fold the Peacock from its crease pattern, with (hopefully) some useful advice on crease-pattern folding in general given a...