The story of how I ended up reading The Hero of Ages is an interesting example of successful marketing in the 22’nd century. 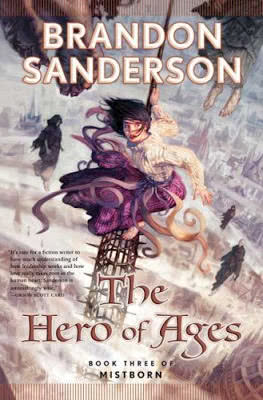 I first heard about Brandon Sanderson after hearing that Robert Jordan passed away. I’ve read most of the Wheel of Time books several years ago, and occasionally checked up on the status of the final book in the series. That’s how I learned that Robert Jordan died before being able to complete the last book, and that an author called Brandon Sanderson had been selected to write the book in his place.

A quick google search led me to the surprisingly good website of Brandon Sanderson. There I found a free ebook of the work-in-progress version of the upcoming Warbreaker book. I read this book and liked it, which made me want to read more books by Sanderson. On his website, he also posted the first couple of chapters of The Final Empire, which I also read and liked. I searched for the book on various ebook sites (since shipping to Israel from amazon is expensive and takes a lot of time), and couldn’t find it, so I left it alone.

Fast forward several months later. A random check in fictionwise showed me that the Final Empire was finally released in ebook format, so I immediately bought it and downloaded it to my palm. I read the book in a couple of frantic-your- priorities-are-up-side-down days. As soon as I finished reading the book, I ordered the second volume, The Well of Ascension. I just couldn’t wait for it to appear in ebook format. Needless to say, I finished reading this book in no time as well.

I was now hooked, and couldn’t wait for the third book to come out. I felt like I was 8 again and couldn’t wait a whole week for the next episode of The Transformers. That’s why I escalated things up, and ordered the hardcover (!) edition of the third and final book as soon as it came out.

The fact that I kept coming back for more, even to the point of ordering hardcover edition, (which is not something I generally do), just shows how good the books are. But the point is that none of this would have happened without plenty of free material on the author’s website. At least on my part, this payed of.