In this article I will show how to fold the Peacock from its crease pattern, with (hopefully) some useful advice on crease-pattern folding in general given along the way.

Before we begin with the actual folding, here’s a quick recap of the steps that need to be taken whenever we fold from a crease-pattern:

For a more detailed explanation, you can see this article on crease patterns.

So lets start by opening the peacock’s crease pattern in another window (or, you can print it, if you’re not ecologically consciousness). This model is not too difficult to fold from a crease pattern, and yet it is not trivial, which makes it a good model to learn from, in my opinion.

If we look at the crease pattern, we will hopefully recognize the creases on the bottom left half of the page as the creases which make up part of the bird base. If you don’t recognize it yet - don’t worry! Most crease patterns are made up of “blocks” of common patterns. If you wish to learn how to fold from crease patterns, you should get into the habit of unfolding the common folds you encounter when folding from diagrams. With time and experience, you’ll be able to connect these patterns to the folding sequence that create them. You should start by learning to recognize the patterns of the basic bases, such as the bird base.

Okay, so we recognized that half of this model is a bird base, and this gives us all the reference we need to start folding. In other models, this step can be more difficult, and I’ll leave it for a future article.

Step 2 - Fold all the creases

One last note before we finally start folding - one of the creases you’ll most likely introduce in this stage is the second diagonal, which isn’t part of the crease-pattern. It’s import to note that this a major symmetry line - that is, if you fold along this line, all off the crease on one half of the page will lie exactly on top of all the creases on the other half of the page. There are many such lines in this crease pattern, but this diagonal is the biggest, and therefore the most important. Recognizing these lines can be a big help when folding the creases to the paper.

Here is how the folded “model” looks, and how it looks unfolded. You can see that we finished nearly half of the crease pattern. 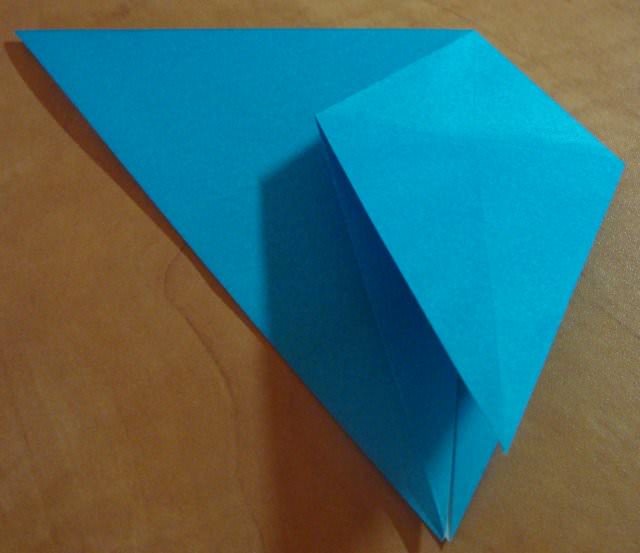 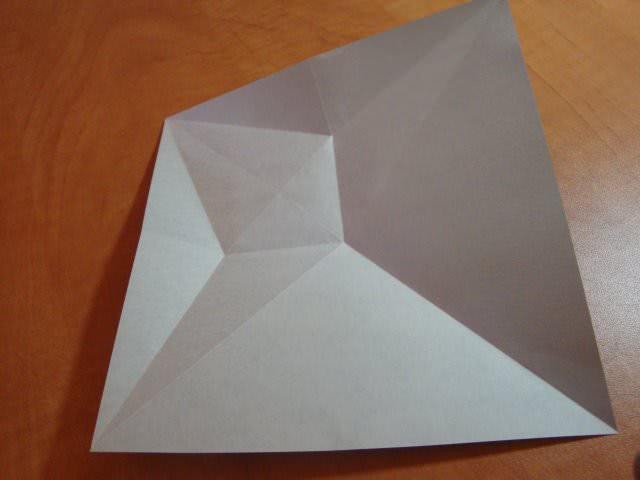 Now, we’ll start looking at the other, more challenging half of the crease pattern.

Whenever we’re not sure how to proceed, it is usually best to look for the biggest creases we haven’t already folded, and start with them. In this case, those are the two parallel diagonal lines which end up all the way in the bottom left half of the paper, near the center. So, let’s fold them. These creases are perpendicular to the major diagonal crease. This means that we want to take the top left corner, and start sliding it along the diagonal until the crease line passes through the existing crease near the center.

Now, if we look again at the crease pattern, we’ll see that there are two triangles we need to fill with creases. After a bit of practice, we’ll recognize these creases to form an inside reverse fold. So let’s fold them, and then we’ll be nearly done. 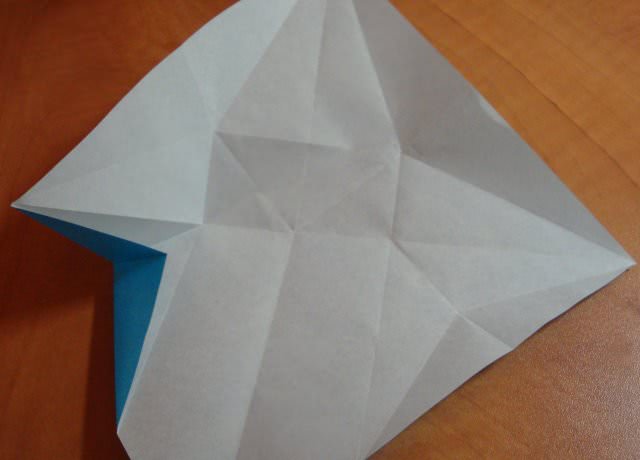 Again, we look for the biggest creases we didn’t already fold. They are again diagonals parallel to the major axis. They fold in half the creases in the top right flap. We fold them, and then add the creases in the center of the paper. 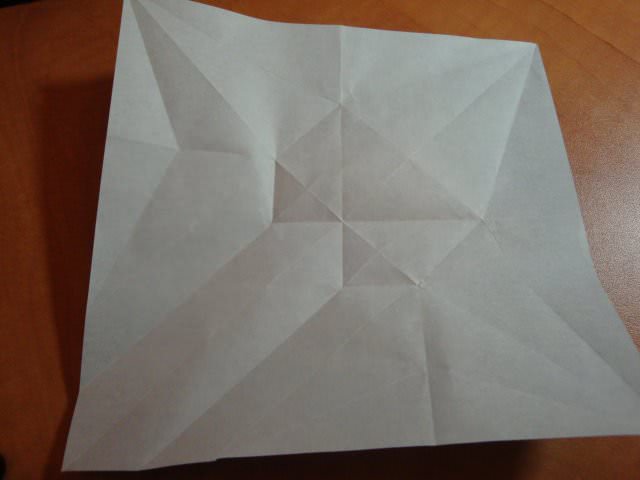 Step 3 - Collapse the paper into the base

Collapsing this base is a bit tricky, but I don’t want to spoil too much of the fun of discovering things on your own. After all, the best way to learn is by doing. But, you do have all the creases in place, and you already know how to fold half of the model. The base looks like this:

The final stage to folding the model is to take the base and convert it into the finished model. Sometimes, this is easy. At other times, this may be difficult. I’ve already identified which flap becomes what, and that’s the first step to understanding how to finish the model. In any case, a picture of the finished model is useful. I won’t include one here, because this is where you can let your creativity take over. You don’t have to do exactly what the original author did. All the building blocks are in place, and you can do with as you wish.

As I said before, the first try is a practice fold. The way you fold a crease pattern the first time is very different from the folding sequence as it would appear in diagrams. There is a much nicer folding sequence for this model, and you can develop your own after you understand how to fold the model.